Is Halloween good for the Jews?!?! 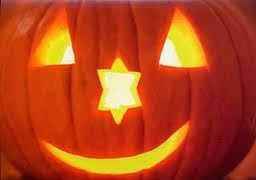 A lot of people talk about the "December Dilemma" of Christmas and Hannukah. Some interfaith families struggle with how to celebrate both, how to respect both traditions, or how to appropriately integrate both holidays under one roof. Other Jewish families struggle simply with the proximity of Hannukah to Christmas - constantly having to defend Hannukah as not being "the Jewish Christmas" or with trying to lessen the emphasis on the gift-giving and increase awareness of the tradition and history of the holiday. Whatever category you fit into, the December Dilemma is a reality of being a Reform Jew in the 21st century.

Some of us might also feel a little bit of strain when it comes to Halloween. Although it is not viewed as a "religious holiday" it's origins have a religious background and the tradition deals with things like spirits, the devil, and pagan Celtic festivals in the Middle Ages. Nowadays, Halloween is taken much more lightly by the general American public and is meant to be fun (I think). But, it can often result in dangerous situations and an unnecessary amount of candy and treats, for no good reason. Some people argue that celebrating Halloween is antithetical to Judaism (read here). Others believe that you can do the same things on Halloween as you can do on Purim, and that is makes much more sense for us Jews, religiously. You want to wear costumes, go around visiting neighbors, eat sugary treats and celebrate by being silly?!?!? Wait for Purim!!!!

But is that really the answer? Perhaps, as modern Jews, we don't completely abandon a secular holiday, and try to justify it with a religious one. Perhaps we don't want to give up a day that is fun or silly, or that the rest of the world enjoys, simply because it doesn't speak to the religious aspect of our lives that is used to creating meaning from holidays. Perhaps, the solution is to infuse that day with some meaning of our own.
On Halloween day, the junior youth group at The Reform Temple of Forest Hills will be reading stories about the Dybbuk (Jewish spirit), the Golem, and other tales of spirits within Jewish tradition. We want to teach our children that it's okay to engage in activities on Halloween, but that there are also Jewish perspectives to be considered. Perhaps you and your family can make costumes that have a funny Jewish theme to them. And then, you can reuse them when Purim rolls around a few months later.
Or, if you're really stuck, the URJ (Union for Reform Judaism) has a great resource page on ways to make Halloween feel more Jewish as a family, without completely abandoning this day, altogether.

Is Halloween good for the Jews??? Is it against everything we believe in? Is it just another dilemma for us to work through in our modern world? Or, is it perhaps ANOTHER chance for us to get creative, think outside the box, and continue to build meaningful Jewish lives in our modern world? You decide....
Posted by Elizabeth Wood at 2:01 PM 1 comment: 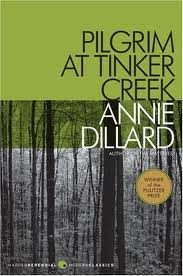 Have I ever told you about my favorite time of day? It's just as the sun is beginning to set, but the world is still light. There's such a softness to the world at that moment...I live for it.

I decided I was working too hard today (what else is new) and I needed to take a break, so I went for a run in a park near my neighborhood. It was perfect. The weather was cool but not crisp. The sky was blue but turning darker as the sun disappeared. There were people and families, but it wasn't crowded. And I had a great time just listening to my music and turning inward for a few moments of solace while I jogged.

But then I stopped. The sun was slowly sinking down and I could say rays of light coming through the branches of a beautiful tree. It was a magical moment. And it reminded me of a passage from one of my favorite books.

Years ago, at summer camp, I had a counselor whom I adored. She and I connected and bonded. We shared many things, but she introduced me to this book called "Pilgrim at Tinker Creek" by Annie Dillard. I read it that summer and have loved it ever since - maybe because of her, but maybe because it speaks to me as well.

Here is the passage:
Then one day I was walking along Tinker Creek thinking of nothing at all and I saw the tree with the lights in it. I saw the backyard cedar where the mourning doves roost charged and transfigured, each cell buzzing with flame. I stood on the grass with the lights in it, grass that was wholly fire, utterly focused and utterly dreamed. It was less like seeing than like being for the first time seen, knocked breathless by a powerful glance. The flood of fire abated, but I am still spending the power. Gradually the lights went out in the cedar, the colors died, the cells unflamed and disappeared. I was still ringing. I had been my whole life a bell, and never known it until at that moment I was lifted and struck. I have since only very rarely seen the tree with the lights in it. The vision comes and goes, mostly goes, but I live for it, for the moment when the mountains open and a new light roars in spate through the crack, and the mountains slam.

What have you done this week, or this month, that has taken your breath away? What has given you pause to reflect?
Posted by Elizabeth Wood at 6:38 PM 2 comments:

Practice what you preach 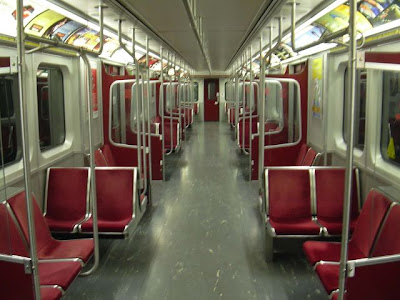 I'm on the NYC MTA (Subway) at least 5-6 days a week. And while I sit there for anywhere from 30-50 minutes, I watch the people around me. I might pretend to do work, or be engrossed in my music, but really I can't help watch the different kinds of people that occupy the same space as me for a particular length of time. I will never see the majority of them again, most likely, but I am so fascinated by having a glimpse into their lives for just a few moments. Some of them are joyous, beautiful, and content. Others are sad, worn, and even deflated. Of the 8 million stories...I'm getting a glimpse of them every day.

There are rules associated with the subway: You don't look at anyone else. You don't talk to them unless you know them or have a specific question. You take up as little space as possible so that others might fit in too (esp during rush hour!)If someone is asking for spare change, you dig into your pockets only if it's convenient for you not to move too much. You keep your distance in whatever way you can in a crowded, crammed, small space.

Today I was riding home and was about halfway there when the door opened up and a homeless man walked in. Instantly, the car smelled different. The half a dozen people or so sitting near me (it was an off-peak hour) turned their heads away.
He was dirty. He smelled. He was limping and wearing only one shoe, and having trouble walking, and his clothes were ripped. It was, admittedly, hard to look at him. He kept talking to himself and trying to move through the subway car. Slowly, but surely. I wondered how long it had been since he'd eaten a real meal. Or had a shower. Or proper clothes and a bed. Or even seen a doctor. I couldn't help but watch the others around me, partially frightened, but also wanting to just ignore him or make him go away. It made me angry, hurt and very sad.

When we got to the next station everyone but me and two other people left the car. I saw most of them go into the subway cars next to us, just to get away from him - this man who was not disturbing or causing harm to anyone. Eventually he managed to sit down and occupy some precious space.

As the train pulled into my station I got up, fished into my pockets, and took out whatever I had. He wasn't asking for anything, and I wasn't sure what he would do, but I gave it to him anyway. He needed it much more than I did. And when I handed it to him, he didn't say anything - but he looked me in the eyes and smiled. His eyes expressed his gratitude, and that was more than I needed.

Every day I think about what it means to be a religious leader. How do I help others? How do I inspire others to live Jewish lives of fulfillment and purpose? How do I make this world a better place? It starts from within. It means less talking and more doing, sometimes. It means having the courage to know what's right in a situation. And we all have the ability to make changes in our world every day.

This Shabbat, as I know the comfort of friends and family, and food, and shelter, and blessings, I will think of his eyes and his smile...I pray that he may know a blessing or two in his life as well.
Posted by Elizabeth Wood at 3:20 PM No comments: