Unpacking from my week at the Brickner Seminar 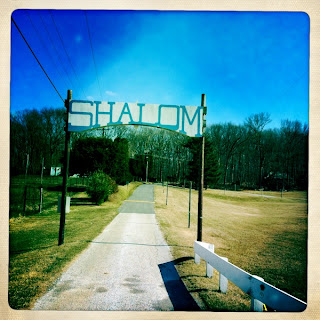 In order to tell you about the last week of my life, I have to begin at the end.
I want to tell you about Ahmed. Ahmed is a retired school teacher from Pakistan. For twenty years he served in the Pakistani Army, where he continues to receive his monthly pension from them. He is married and has one son, who is currently in his residency at Columbia University Medcial center after just having finished medical school there last year. Ahmed owns a few properties in Yonkers, where he lives, and has renters and tenants that help meet his income needs. When he was in Pakistan, he obtained a Masters in Political Science and his wife obtained her PhD in Philosophy and they both taught for a while, until they decided to leave Pakistan in 1985 in order to seek out a better future for their child, in America. Ahmed worked with the Board of Education for a while, but ultimately found that it wasn't the right fit for him (his accent often got in the way, rigorous demands, etc). So he worked as a paramedic for a number of years, driving around the city and rescuing those who needed help most. But, as he realized that this kind of work was for the young and he was getting older in years, he decided that in his retirement, he would continue to make ends meet by driving a cab in New York City.

Tonight, Ahmed was my cab driver. After coming home from a week long conference with 30 other rabbis, intensely studying texts on social justice and the value of human relationships, here was my gift. I was tired after the journey home, I was stressed out about thinking of all my missed emails, and I was cranky because of the rush hour traffic. But Ahmed engaged me. He asked me a few questions and I answered. Normally, I'm not one to make a lot of small talk with others or to share my "story" with people who I meet randomly. It's not my style - I'm busy, I have other things on my mind. But after just coming off of the week I did, I put my phone down, and I started to listen and engage. We started off with small talk, but we both found one another so easy to talk to, that we continued on.

Ahmed told me pieces of his story, as I've mentioned above, and I told him parts of mine. He told me that he was about to reject my ride from Penn Station all the way to Queens, but he felt bad for me standing there in the rain with my luggage. I told him I was sorry to make him have to drive all the way out to Queens in the traffic. But we both agreed that the conversation was worth it all.

I explained where I had been for the last week, at the Brickner Rabbinic Fellowship Retreat and what I had been doing there. I shared a story with Ahmed that I had learned from the weekend, a text that I had felt compelling, and the general gratitude I had for the time I spent immersed in text and study with colleagues and friends. He told me of similar ways in which he used to study, as a student and even as a teacher in Pakistan. But then he said to me, "Now, I study people, Elizabeth. My time with each of them is different, but I still get to learn." As he pulled up to my apartment, Ahmed got out of the car, came around, hugged me and kissed me on the cheek. "Thank you Ahmed," I said. "You been the perfect end to an incredible week."

This week, at Brickner, I learned so MANY things. I learned that text study is not just about the words on a page - it's about the stories behind them and the value hidden beneath them. Ahmed is not just a cab driver in New York City to ignore on my way home - he's a person with a family and a history and a story and a life.

I learned that life is about helping others, working with others, seeking out the needs of others - which you can never really know until you understand their perspective. Who knew that Ahmed had given up his career in Pakistan in order to give his son, the doctor, the kind of life he dreamed for him?

I learned about the value of relationships and the way in which time that is given to others and stories shared are gifts about these perspectives and relationships. Ahmed and I didn't have to talk the entire way home. He could have kept his eyes focused on the road and I could have kept mine buried in my smartphone. But we didn't. We shared our stories, our goals, our perspective on a number of ideas and thoughts and values.

I learned that as Rabbi, I still have so much to learn. It's about the journey and the ability to gather information on our journey and use it for good in the world. Ahmed taught me that too. He never stops learning. "Now, I study people."

I am so thankful to the Religious Action Center, my brilliant colleagues whom I had the privilege to study with and learn from this week, our wonderful guest speakers and teachers for an outstanding week together. It taught me that there are a million people like Ahmed around me all the time - some I interact with and others I do not. But more so, it reminded me of the sacred nature of relationships with our fellow human beings. Ahmed and I had a holy encounter, sealed with a hug and a kiss and well wishes for the future.

We are obligated to help one another, our Jewish wisdom tradition teaches us that. And the paths that lead to righteousness and justice are varied and different. But in that obligation there is reward - connection, fulfillment, and kedusha. When we seek out the other, we seek out something greater than ourselves that helps us become infused with God's spirit and the spirit of humanity.
Posted by Elizabeth Wood at 7:22 PM 1 comment: